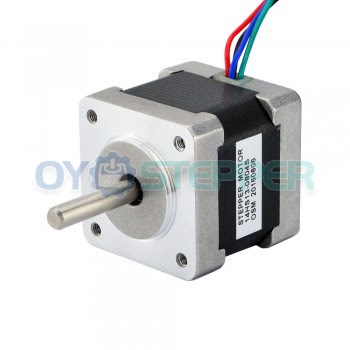 Need help choosing the right Stepper Motor? Read this: Uni-polar vs Bi-polar or learn more about Stepper Motor Basics.
at July 19, 2018 No comments:

In order for the linear stepper motor to operate properly, it will need to be connected to a motion controller or indexer and a stepper motor driver (with power supply). See diagram 1 for operation flow.

Step 1. A program or motion profile will be written on a PC or laptop and downloaded to the motion controller/indexer. This program will contain parameters such as speed, acceleration, deceleration, desired move, etc…

Step 2. Based on the program parameters, the motion controller/indexer will command the needed number of steps in the desired direction in order to move the desired amount.

Step 4. The stepper motor linear actuator will move the desired amount at the programmed speed and acceleration. )

Stepper motors that are traditional rotary motors couple to mechanical rotary-to-linear motion devices (often in the form of a threaded shaft that mates with traversing nut or carriage) to produce linear motion. In this actuator setup, the motor output shaft usually couples to the screw to turn it … and advance the nut (or carriage) and attached load. These are usually small designs that go into consumer products or small-stroke applications in industrial machines.

In contrast, true linear stepper motors—which this FAQ covers in more depth—function much like linear-motor types but leverage the same mode of operation as rotary stepper motors to produce linear motion. More specifically, traditional linear-stepper motors (using variable-reluctance operation) have a moving carriage called a forcer with a permanent magnet, laminated steel cores (which the manufacturer cuts into teeth) and coils around the laminated cores. This forcer engages a straight and stationary track called a platen. This linear-stepper part is mostly steel bar cores (which the manufacturer cuts into teeth and plates with nickel). For super-long strokes, installers can put multiple platens end-to-end and have the forcer ride on all of them.

Summary of linear stepper motors
Engineers most commonly use these linear actuators in larger installations; on axes that move heavier loads; and in high-end medical or material-handling applications such as pick-and-place machinery that require extremely high precision. Like rotary equivalents, linear stepper motors or precision linear actuator either use a variable reluctance (just described) or a hybrid mode of operation. A hybrid linear-stepper platen is like that of a variable-reluctance linear stepper. In contrast, the forcer has multiple permanent magnets, magnetic U-shaped cores (with coils around them) and a steel yoke.