Stepper Actuator - Full-Step
In full step operation, stepper actuator motors step through the normal step angle e.g. 200 step/revolution motors take 1.8 steps stepper motor while in half step operation, 0.9 steps are taken. There are two kinds of full-step modes. Single-phase full-step excitation, where stepper actuator motors are operated with only one phase energized at-a-time. This mode should only be used where torque and speed performance are not important, e.g. where the motor is operated at a fixed speed and load conditions are well defined. Problems with resonance can prohibit operation at some speeds. This type of mode requires the least amount of power from the drive power supply of any of the excitation modes. Dual phase full-step excitation is where the stepper actuator motors are operated with two phases energized at-a-time. This mode provides good torque and speed performance with a minimum of resonance problems. Dual excitation, provides about 30 to 40 percent more torque than single excitation, but does require twice the power from the drive power supply. 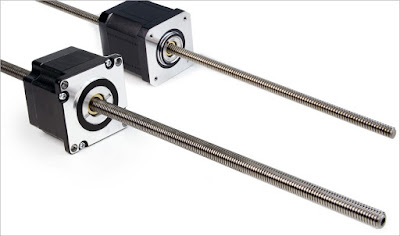 Stepper Actuator - Half-Step
Stepper actuator motors have half-step excitation, alternate single and dual-phase operation resulting in steps one half the normal step size. This half-step mode provides twice the resolution. While the motor torque output varies on alternate steps, this is more than offset by the need to step through only half the angle. This mode has become a commonly used mode by Anaheim Automation because it offers almost complete freedom from resonance problems, and is cost-effective. Stepper actuator motors can be operated over a wide range of speeds and used to drive almost any load commonly encountered.


Stepper Actuator - Micro-Step
In Actuator Motors microstep mode, a stepper actuator motor's natural step angle can be divided into much smaller angles. For example, a standard 1.8 degree motor has 200 steps-per-revolution. If the motor is microstepped with a 'divide-by-10', then each microstep would move the motor 0.18 degrees and there would be 2,000 steps-per-revolution. Typically, micro-step modes range from divide-by-2 to divide-by-256 (51,200 steps per revolution for a 1.8 degree motor). The micro-steps are produced by proportioning the current in the two windings according to sine and cosine functions. This mode is only used where smoother motion or more resolution is required. Generally, the greater the divisor, the more costly the microstep driver will be. Also, some microstep drivers have a fixed divisor (least costly) while other have a selectable divisor (most costly).

HOW TO CHOOSE THE RIGHT BUILT-IN TECHNOLOGY
How are Stepper Actuators Controlled?